Fluorescent diamonds have long been debated in the diamond industry, with many at loggerheads regarding the impact of fluorescence on the diamond’s value and the way it looks. Either way, a fluorescent diamond can often present you with a great way of saving a bit of cash when buying a diamond, and there is nothing wrong with going down this route so long as the effect is not very visible.

So, how come some diamonds are fluorescent? And, what does this really mean in terms of appearance? Some diamonds contain sub-microscopic structures that make them fluorescent when exposed to UV lighting and thus they will typically emit a blue glow as a result. Other colours can occur, such as orange, green, and yellow, but blue is the most common.

‘Fluorescence’ is not something that is graded; it is simply a characteristic. But, it does appear that it is getting mentioned increasingly in grading reports, and the price of the diamond can be lowered as a consequence. The GIA have even provided five levels of diamond fluorescence, which are as follows – none, faint, medium, strong, and very strong.

However, the truth is that this is not something that tends to have much of an impact on the appearance of the diamond. In fact, when it comes to low colour grade diamonds, such as a K or L diamond, this fluorescent effect can end up making the diamond appear more colourless, which is obviously a benefit. There are some rare instances when it can result in a hazy appearance, and this is when you want to stay away from fluorescent diamonds. 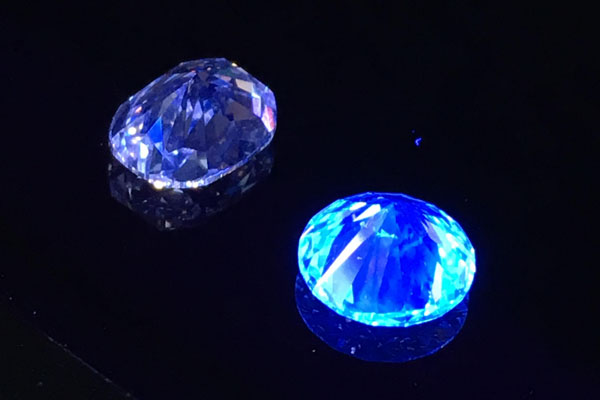 Picture: Fluorescent in a diamond under a UV light (right)  © Reve Diamonds

Emission of visible light by a material when its exposed to ultraviolet radiation.

What exactly is Fluorescence?

Fluorescence is known as the very visible light that some diamonds give off when there is invisible ultraviolet rays present and surrounding the diamond.

Fluorescence can also be referred to as the toughness of a diamonds reception to the UV rays which is known to be part of natural daylight.

As long as the diamond is exposed to the UV light, the light emitted will be continuous.