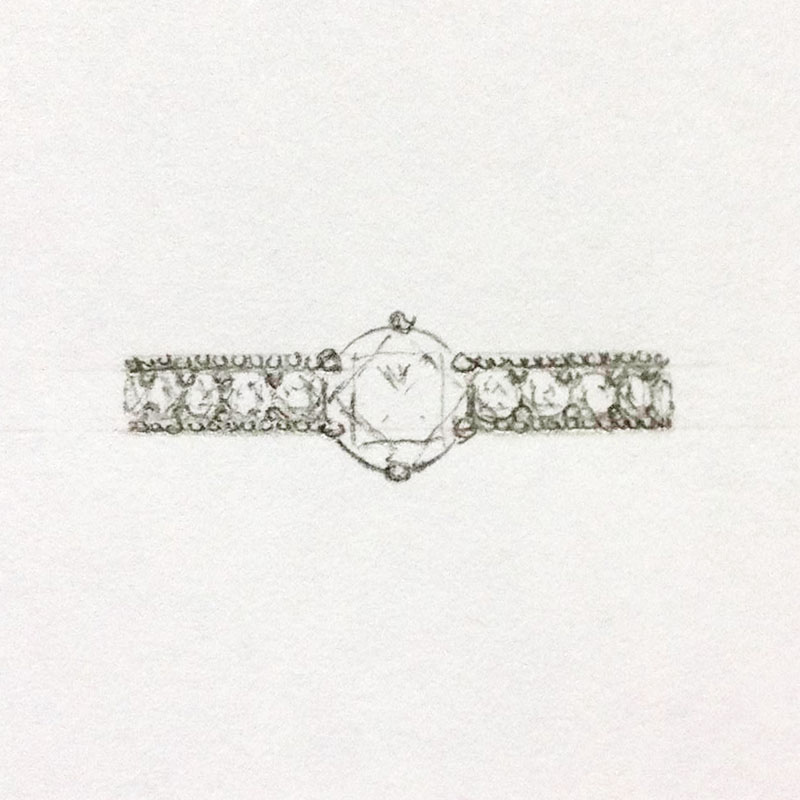 Rings with a mille grain setting present a wealth of possibilities. This is because you have the ability to play around with a whole host of styles and shapes. This is the perfect setting for those who have a creative engagement ring in mind, perhaps even wanting a bespoke engagement ring designed just for them.

So, what exactly is the mille grain setting? This is a great way of setting tiny accent diamonds and stones into the engagement ring’s shoulder. Let’s reveal how this works. Firstly, a seat will be drilled into the metal. After this, the stone is laid into the recess, and then at the top of the ring a grain will be raised using a special tool. The setter will push a tiny raised piece of metal over the top edge of each stone while the tool gouges out a small piece of gold. After this, another tool is used in order to round the metal so that there is a beaded affect, which has come to be associated with grain work.

The grain setting is popular with those who want to add some sparkle to a ring containing a coloured gemstone as the feature. Thus, for those who have a sapphire or ruby ring, for example, they may want to consider smaller accent diamonds to add a dazzling finishing touch. On the other hand, if you have a diamond ring, you can use this approach to add a splash of colour to create more interest and style. All in all, this is the ideal way to add a little bit of personality and uniqueness to your ring.

In most cases, the grain set stone is square shape, but it does not have to be the case. You can be creative and play around with different shapes. However, one thing you do need to be aware of is the depth of metal around the stone, as you need to make sure there is enough to accommodate the smaller stones. This is something we will be able to assist you with.

Mille Grain is a jewellery technique which refers to the textural effect of a close-set line of metal beads that are typically used as a border on the edges or bezels of jewellery.  The term Mille Grain aptly describes this technique as ‘mille’ is derived from the French language meaning a thousand and from the English word grain as it has the appearance of thousands of tiny beads upon a metal precipice or edge.

Mille Grain first reached popularity in the during the Art Deco era when it was a commonly found detail on rings and wedding bands from this period. However, in reality, Mille Grain jewellery precedes the Art Deco period as there is evidence of Mille Grain earrings being worn in Asia dating back as far as a few thousand years ago.

The technique of Mille Grain adornment on a piece of jewellery is created by a knurling or a Mille Grain tool. This tool is impressed into the metal edge of the piece leaving furrows or by forming tiny beads of precious metal and then soldering them to the jewellery. Mille Grain edges showcase fantastic craftsmanship and artistic design. It is this painstaking attention to detail that was undoubtedly one of the reasons that this style became so popular as presenting an engagement ring with such intricate, time-consuming details was seen as the ultimate romantic gesture.

More commonly in today’s jewellery making the piece is designed on a computer and 3D-printed into a jewellery mould to form the Mille Grain making this antique style thoroughly modern for contemporary jewellery, giving new pieces that much sought after vintage feel.